It’s Day 3, and still my body requires that I get out of bed before 10am. Today, it was 9.07. Is it weird that I know the exact time I wake up every day? I know for a fact that, barring any outrageous circumstances, I am always getting up between 9.16 and 9.42am. Seriously, it’s that specific. Alas, today continued a trend that I was afraid might occur.

The trend had nothing to do with the time of getting out of bed and everything to do with the structure of the workday slipping out of my grasp. Today, I did work for the client for roughly an hour. After that, I was all about getting my own things done today. Then again, it’s Wednesday and that’s a special day in my week, it’s Dungeons & Dragons day and that means I generally have a massive amount of things I feel I need to prepare (regardless of the slight chance of the players actually encountering any of it). Today was slightly different, the party is in some catacombs and I knew they would press ahead.

Since I had a few Rootbon Beers last night (it’s Bourbon with a splash of root beer), I was unable to come up with sufficient logic puzzles for them. So I called it a night and left it for the morning. So today I had to produce some exquisite puzzles that test abilities dealing with strength, intelligence, dexterity, constitution, wisdom, and charisma. Alright, the last one didn’t get a test this time. Instead, I’m substituting that with puzzles that work off of character alignment – because of the scenario and the story hooks.

I won’t go any further into any of that because that’s best left for a different blog post.

I pitched a proposal for a minimal continuation of the current project to the client upon their request. My proposal was based on both my requirements as well as those of the client. It revolves around that scene I outlined last post “don’t let the social media audience peek behind the curtain to see that things are on fire.”

It is a simple plan, one that I believe will, at minimum, maintain the audience on social media that we have painstakingly worked to generate over the past year, and hopefully, to activate that audience and convert them into customers to show the efficacy of the client’s core system.

Of course, that all sounds far more complex than the reply email one gets when pitching something like that, which amounts to “thanks for that, we’ll be in touch soon.”

My term for the end of project lapse, when I’m suddenly cut loose from the constraints of a regular workday – involuntary vacation. I wasn’t laid off, I didn’t lose my job. I just reached the end of the work that needed doing for one reason or another. And so, I’m without work 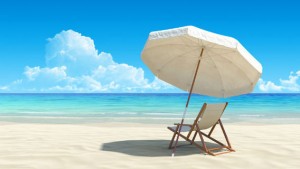 but not without employment. Indeed, a strange state to be in from time to time. Yet over the past eight years, one I’ve come to realize is necessary.

Freelancers don’t get paid vacation, and usually live hand-to-mouth. So, when an opportunity to take a week and relax comes along, one would be a fool not to embrace it fully. And so, I am embracing it.

Today was the first official day of my involuntary vacation as I did exactly one hour of work, possibly unpaid, for the client, and then went about the day as if it were my own, because in reality, it is.

Yeah, I know. I said yesterday that today I would go find new clients. But honestly. I just didn’t care enough to do it. So I didn’t. I took a legitimate day off. I did creative stuff that makes me feel good, makes my players better enjoy the game, and really, doesn’t make me feel guilty in the least for not doing anything else.

I also spent time with my daughter because this afternoon she and her mother flew to Florida and will be there for a week. It will be the longest I have not held my daughter daily since she was born 11 months ago. I might not be an overly emotional type, but this is something that I am keenly aware of.

Those looking for advice on what to do next after a few days of having lost a major client as a freelancer need look no further than this: Live life a little. We don’t freelance to be rich and work 12 hours a day, we freelance because we want to live life by our own standards, control more variables and enjoy the time we can get with friends and family on our own basis. If we wanted to live by the rules of the corporate structure and world, we’d work in an ill-light cubicle in a skyscraper downtown and hate our commute, our job, and most likely our co-workers and bosses. As freelancer, we are free of most of those shackles and can take a more flexible approach to the old “work to live, not live to work” adage.