Alright, so, this morning I woke to an email stating that the project I have been working on for much of the last year has been put on the back burner and that my major source of income is about to dry up. It happens, after all, that’s part of being a freelancer. Things like “always expect the unexpected” team up in your mind with other things like “Don’t Panic.” Panic? Who’s panicking!?! I’m not panicking!! Am I?!

Seriously, I’m not panicking actually. If I were I would probably be out getting completely blitzed on bourbon and PBR. The fact that I’m writing this, instead of doing that, clearly shows that I’m not panicking. Right? Cool, logical thought will pay off in the long run. 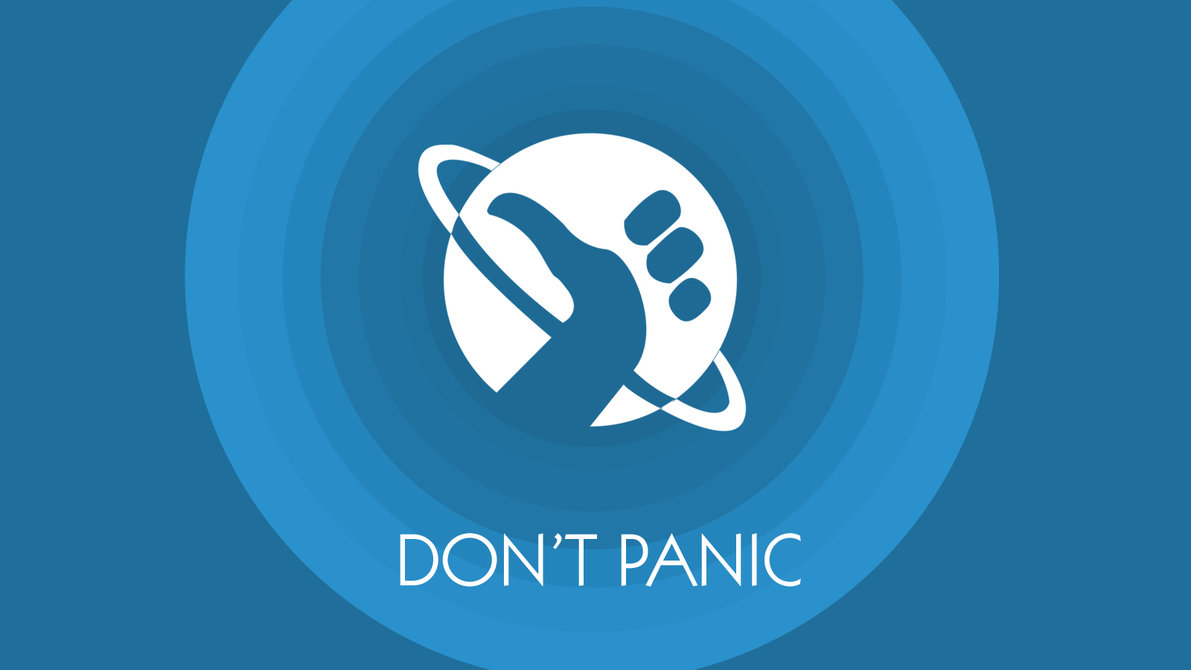 The Last Time This Happened

The last time this happened? Yeah, I panicked a bit. You see, it was the end of April 2014 (not my month, April – the 1st is when this current projects hits low gear) and the birth of my first child was imminent. In fact, Leiana was born on May 3rd – Free Comic Book Day. So yeah, last time, I was a little panicky. (Yeah, I asked her to wait til May 4th as well… Star Wars Day)

However, as things do, it worked itself out. In fact, that was when I landed this project. So pretty much a year later and I’m still on it shows that I’m good at what I do I guess since it started as a one month trial run.

Actually, I’ve never had a one month trial not turn into a long-term gig. Hey, that’s a mental pick me up!

Since this was a particularly nice and fun client I did not immediately stop all work on it.  I read the email, twice, whispered “awww…fuck,” hey, I’m human, don’t judge me. And then?

Well, I went to  work. They had asked for a proposal for a much lower level of activity which I started pondering immediately while I did some of the regular Monday stuff I do for them – some social media, some blog stuff, some behind the scenes writing stuff. Admittedly, I only did a few hours as I wanted to get the proposal together.

However, the proposal requires more information from the client. So I did what any good freelancer would do, I asked them for the information I needed. Then I set about to re-arranging my office. 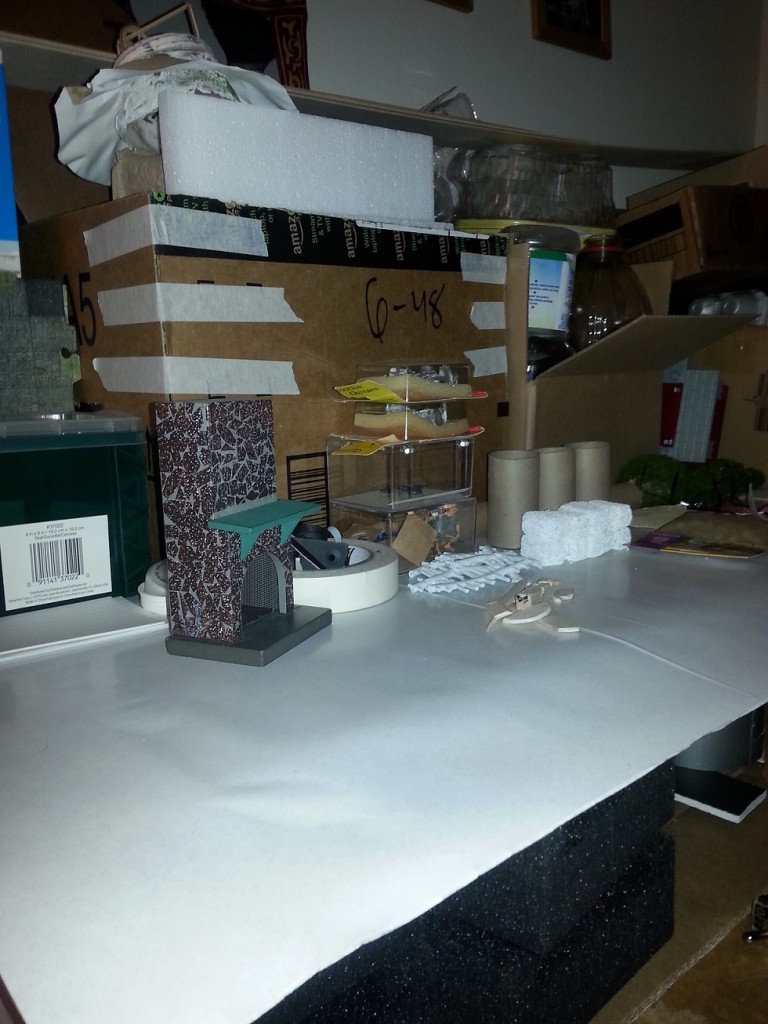 The office was stacked almost to the ceiling with teetering towers of crafting projects in various states, books, recycled and scavenged materials and the like (these images are the much improved current state). It’s part office, part mad scientist lab really. Since this seemed to pose a danger to anyone in the area, I decided to get cracking on rearranging things. 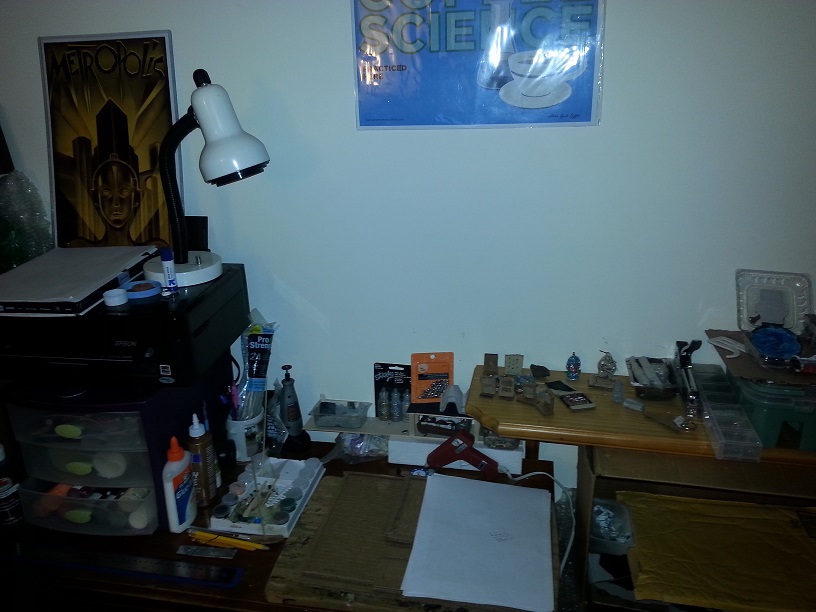 That’s part of my process. I am going to have to change gears from the same routine I’ve been on for almost a year, so the best place to start is to freshen up the workspace. Plus, there’s a piece 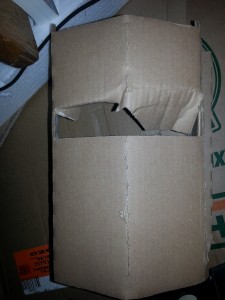 of cardboard that totally looks like Optimus Prime’s head just staring at me, begging for attention.

It didn’t get any as you can see. Though a lot of other things got cleaned, swept, organized and prepared for a crafting session later today (mostly for the Dungeons & Dragons games I run, but there are some other projects in there as well).

Then I had the idea to write this. Which is tougher than it sounds because WMSE tells me it’s 54 degrees out and the motorcycle is also begging for attention. If you’re from the north you know that is more than warm enough to get out riding, and about the best we can hope for round this time of year.

Oh, the proposal? I have it formed in the back of my head. That’s how my brain works. I think about it while I’m presently focused on other things, there was just a recent study that confirmed this works in fact. That way my subconscious can weigh the pros and cons, the needs and wants, and the client requirements and formulate what I believe the best way to move forward. It’s how all projects should be approached, but often aren’t. Ce la vie.

Now, I’ve pretty much got the proposal for the client, a newly organized workspace, and a pile of things to drag out to storage and the garage. That last part really sounds like a subconscious excuse to go see the motorcycle, and it probably is just that. 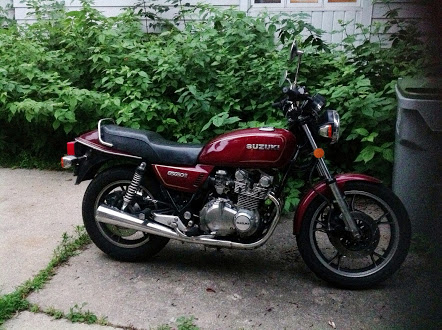 So all things considered, day one hasn’t been nearly as bad as I might have made it. I didn’t panic, I got some work done for them and for me, cleaned out some cobwebs and got some things out of the ever-shrinking apartment and into storage all before 2pm. Plus, by the time you read this, I’ll already be out on the bike zipping around town.